“In war, then, let your great object be victory, not lengthy campaigns.” -Sun Tzu, The Art of War”

In the last (cliffhanger!) episode of “Just One Mom’s Opinion,” our heroine was devastated by the return of the dreaded scalp scourge (lice). Read on for the exciting conclusion to this tale/tail.

It was late August on the Cape, and instead of meeting my friend Bree at Old Silver for afternoon beach cocktails I was standing in my kitchen, staring in horror at my daughter’s scalp. Crestfallen disbelief soon turned to stone-cold resolve, though, as I realized that to defeat this scurry-legged foe, I needed back-up.

Time to call in a Professional.

As usual in a crisis, I turned to my friend Sarah and the internet for help. Both directed me to Maryellen Kumiega, AKA “The Picky One,” AKA Badass Lice Assassin.

The word “nitpicker” has many connotations, none of them positive. Google tells us that a “nitpicker” is “a person given to harsh judgements and finding faults.” My imagination tells me that a “nitpicker,” (which is, after all, a vowel and a consonant away from “nosepicker),” is an overweight, stringy-haired old lady in a stained sweatshirt who waddles into your house with a mouth full of bobby pins, settles down on the couch and says things like, “Ima pick myself some nits now, chile. Y’all mind if I watch ma stories whilst I git ‘em?”

She was not what I expected.

Salvation arrived in the form of a trim, neatly dressed woman in her mid-late forties who carried a stool, a high-powered spotlight, and a bag of pesticide-free whoop-ass. Mild-mannered and soft-spoken, Maryellen spent the next hour educating me about lice eradication while she gently clipped, sprayed, and combed the critters out of my daughter’s hair. It felt like a homey hair salon, only with more death. 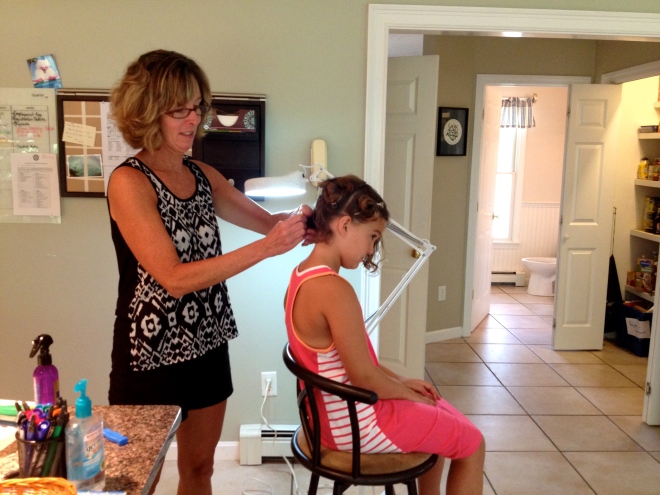 The first step was the application of a plastic-based Spray of Death to my daughter’s sectioned hair (Divide and Conquer). Next, she wielded the steel-toothed Comb of Death to cull the stunned critters much like Lord Walder Frey’s dispatched his assassins to destroy the Stark family in The Red Wedding on the Game of Thrones. As a final humiliation, she then trapped the lice and nit carcasses on sticky paper (Lint-Roller of Death), where they lay stricken and motionless while I cackled evilly.

Maryellen’s motto is, “When in Doubt, Comb it Out.” Not quite as intimidating as “With Fire and Blood, I Will Take What’s Mine,” but good advice all the same. To that end, she recommends the purchase of the LiceMeister Comb, a powerful weapon available on Amazon for under 15 dollars. I bought three.

She recommends combing out your child’s hair during or after showering 2-3 times a week for the first three weeks after treatment and once a week after that, all the while loudly humming “A Song of Ice and Fire.” This will serve to thoroughly eliminate and intimidate any remaining lice or nits and prevent future infestation.

And so, 100% liberated from the scourge of lice, my daughter and I bid a fond farewell to the lovely Maryellen (“Hope to see you again…never!). Yes, the cost was high, but to paraphrase the famous Mastercard commercial:

Head Lice removal: $125
Travel fee: $20
Two Licemeister combs and one bottle of Lice Prevention Spray: $46
Guaranteed total destruction of all critters, along with lint-roller sheet full of carcasses in plastic baggie to prove to husband that the lice infestation was, in fact, not imaginary: PRICELESS.

Currently residing in Sandwich, Massachusetts, Kristi is an aspiring writer and mother who spends most of her time ferrying her children to various sports practices and doctor appointments. She also substitute teaches and reads romantic fantasies by the bushel. View all posts by kristibader